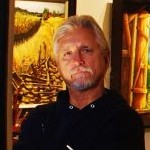 Steve Grzyb grew up in West Virginia where he spent many days as a child exploring and learning to appreciate the beauty of the hills, valleys, woods, and farmlands of the Appalachian Mountains. It was perfectly normal back then for kids to take off exploring in the morning and not return until supper time. No matter where he is today the rich colors and smokey air of the fall always creates a yearning to go back home. Although he always had a knack for drawing, Steve really didn’t discover art until he was a junior in high school in Cleveland, Ohio, where he won several National Scholastic Art Awards.

While working on his Bachelor of Arts degree at Marshall University, Steve worked at a local TV station designing sets, lighting, directing commercials and producing newscasts. He also served as the art designer and illustrator for the Marshall University’s Year Book. His love of television was only second best to his love for art. The combination launched him into a long and enjoyable career.

His college degree and career were put on hold when he was drafted into service during the Vietnam War. As an illustrator in the US Army Signal School he was awarded the Army’s Commendation Medal. His artistic talents helped him escape many of the KP and guard duties others had to endure as officers would excuse him in exchange for paintings and cartoons.

37 years later, Steve finally received his Bachelor of Arts degree from Marshall University. He has a large collection of drawings and paintings in a variety of medium that he created over the last 40 years. Those works are just now being displayed at his Gallery/Studio: Art By: GRZYB at 133 South Central Ave. in Old Town Eureka, MO. Steve is a Juried Member of the Best of Missouri Hands and Greater St. Louis Art Association. He is currently the President of the Greater St. Louis Art Association.

Painting in acrylics, oils, water color on canvas, board & paper