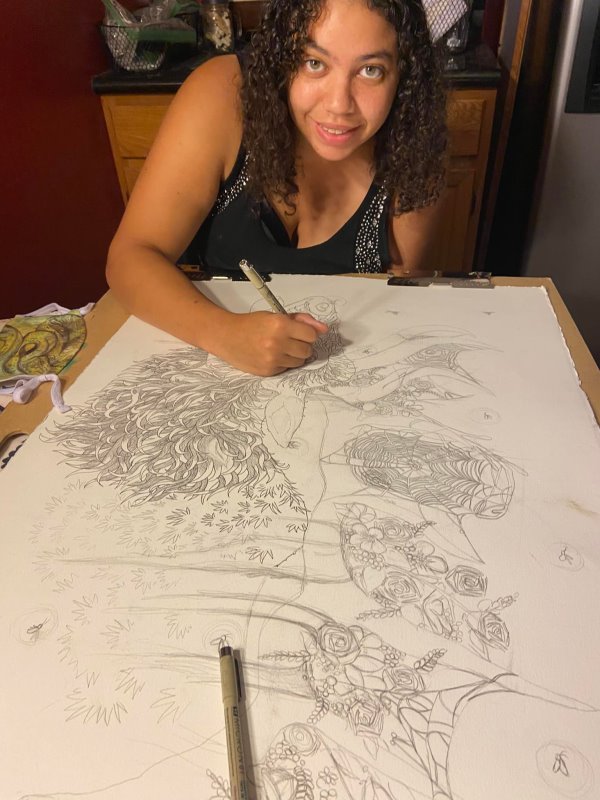 Alison Martz-Bozarth graduated from Webster University with a Bachelors in Fine Arts and an Emphasis in Illustration in 2017. She was the first Illustration Emphasis at that school, having helped forge the program during her time there where she experimented with medium and style to find a look that was truly her. Having long considered her niche in illustration to be the addition of tiny and hidden details, Alison knew her eventual style would need to incorporate the concept of being “simple to observe but complex to truly appreciate.” Her eventual company name, Freckled Illustrations, would embody that concept nicely. “On the surface, it’s a pretty face value name. I have freckles. These are my illustrations. It’s also a comment on the style and nature of my work though. My art has always been all over the place and a tad scattered. Even when I have cohesive themes, I can go in widely different directions with a piece and it can end up far off of the point I intended for it. There’s no room for perfection here; the lines aren’t going to line up nice and symmetrical. I have to accept that there is beauty in natural chaos, just like a pattern of freckles.”

That chaos can be felt bleeding into the style she is most known for; a unique technique she stumbled onto in the summer of 2018. While workshopping artistic styles with her grandmother one day, she was introduced to the process of painting watercolors on yupo paper. “Stepping into working with yupo paper was a game changer for me. It helped me feel comfortable with painting by minimizing the need for color to be right and focusing on just letting it be what it was.” Alison, who is always looking for ways to push her work and expand on concepts she is comfortable with in new and meaningful ways, found solace in the vibrant streaming pools of pigment clashing against one another and envisioned them as the environments of towering elephants or stalking cheetahs which she would draw on top of them. She would finish off each of the 100 pieces in what would come to be known as her Tiny people with Giant Series with small, shadowy silhouettes of people that both gave a sense of scale to the enormous beasts and gave viewers a game in the vein of Where’s Waldo or Eye Spy while engaging with them.

“I have to actively tell viewers about the little people or they tend to miss them completely. Early on, I had someone who had bought one of my pieces run into me at a fair and express that she hadn’t known about the people when she bought the piece originally. She said a houseguest had noticed one and the two of them had scoured the piece together, trying to find them all.” On many levels though, the ease with which one can initially miss the little people is a victory for her original detail-oriented goal. The pieces are great for animal lovers who just want to hang an owl on their walls whether or not they notice the nondescript humans surfing on its falling feathers or riding on its beak. They succeed in playing into the intended environmentalist metaphor for the series by representing people holding on to animals and living among them in a stance of solidarity and support, keeping them safe and expressing a level of codependency. “Anything with a concept I dive into and it is what drives me to create.”