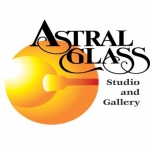 Nearly every piece of art work created in our studio is at some level a collaboration between my wife, myself, and the physical characteristics of the medium. In the beginning, we produced pieces and worked hard to make them conform to our vision. In time we found when we failed to attain our vision, the failure itself would send us off on a new tangent. Now we find it difficult to view anything as a failure. Rather we look at our work as an evolving continuum.

Whether we are working in the warm studio with kiln formed glass, or the hot studio with off hand blowing we make every effort to let the glass describe itself. This perspective has brought us to places we might not have otherwise experienced. We have found the people experiencing our glass may have far more complex feeling about it than we may have had in the creation. We enjoy hearing peoples reactions, and many times incorporate those feelings into new work. Our work is not the mysterious, the reaction to the work however is another story. We work in a historic building with able assistant Shane Andrews and an assortment of dogs, cats, and neighboring artists.

Judy was born in 1948 at Yuba City California. She attended American River College and studied silversmithing at Cerritos College in southern California. She worked as a dental assistant while raising a child as a single parent. In 1975 she moved to Nevada City California. She met her husband Gary at his studio in 1978. She studied stained glass at ‘The Glassworks’ and later, with Gary’s help, opened a studio and supply store at Southshore in Lake Tahoe. Judy taught classes and executed glass commissions in her studio. In 1980 Judy returned to Nevada City and began her partnership with Gary. In 1988 Judy began working part time for Schmidt/Rhea Glass. This studio produced paper weights and jewelry. Judy worked at a variety of tasks including; hot shop assistant, coldworking, glass cutting, glass fusing, bead making, and designing and constructing jewelry. In 1992 Judy attended Red Deer College in Alberta, Canada where she studied mold making for blown glass as well as assisting in the hot glass sessions. Judy currently works in Clarksville, Missouri at Clarksville Glassworks, a studio and gallery where they create two and three dimensional pieces that can be viewed at galleries nationwide.

Gary was born in 1951 at Lynwood California. He attended Grossmont College at San Diego State University. He left a career as a medical supply purchasing agent to open a stained glass studio in 1974. In 1976 Gary moved to Nevada City, California and operated a studio and gallery. Gary met his wife Judy in his studio in 1978. Judy and Gary pursued architectural glass commissions for about ten years, and then began to explore fusing and slumping. Gary’s early hot glass experience began in 1989 when he assisted Michael Schmidt with the construction of a production glass studio. In 1992 Gary received his first off hand blowing instruction from Michael and continued to study basic technique at Schmidt/RheaGlass until 1994. At this time Gary acquired his own equipment and continued to experiment. In 1998 he attended Red Deer College in Alberta, Canada to study Italian styles and various other off-hand blowing techniques with Jeff Holmswood.

Currently Gary works with his wife at their studio/gallery in Clarksville Missouri. Their studio provides them with the equipment to manipulate glass in liquid or solid state. Their work can be seen in galleries and private collections worldwide.